Yesterday, Hana turned one! It’s amazing and wonderful and unbelievable. We feel so lucky and grateful to have Hana with us, happy and relatively healthy. On her birthday we gave her a white cupcake, which she smashed up with her hands and maybe a tiny bit of frosting ended up in her mouth. She thought it was great fun! But to really celebrate, we are having a big party on Saturday for local friends, family, neighbors and people who have showed their tremendous support in the last year. I haven’t been able to contact, locate or even figure out who some of the people are that helped us, but we are deeply appreciative. To all of you who don’t live in the area, we wish you could join us!

Hana has been doing great. She is babbling more, including some new sounds. She is nibbling on foods much more, still not enough to be significant for nutrition, but she is definitely more interested. She went an entire week without vomiting! This is a new record. She is getting really busy crawling around and climbing on things. She usually has a good day if it involves going to the playground where she likes to crawl to the top of the play apparatus (what do you call those things?).

She hasn’t been drinking quite as much by mouth. I was really stressed about it for a couple of weeks and then I finally decided that I really, really have to stop stressing about weaning her from the NG tube – or at least I have to tone down my fixation on it. The feeding specialist doesn’t feel like she is quite ready to wean from the tube but does feel like she is on the right track and making nice progress. So, I offer the Milk Bear to see what she will drink and when an hour goes by if she hasn’t finished it I pour it into the feeding pump and get that going. It does suck to have to tether her to the feeding pump.

Whenever I feel like something sucks I remind myself to have a good attitude. I have learned many valuable lessons through all of this, but the one I’m focused on now is how much better things are when you have a good attitude. People are nicer and more helpful. I don’t waste my energy and time being upset about something. I’m sure its better for Hana too. Besides all that, the experience of life is so much richer when we choose a better attitude.

I am reminded by how much love and support we have gotten through all of this and it is so much easier to have a positive attitude! We are so grateful. We are so thankful. We couldn’t have done it without you!

Look at this baby girl!

Tuesday we took Hana to Stanford for an appointment. I remember when she was still in the CVICU at Stanford and was starting to stabilize and we started hearing about what might happen next. One of the things they mentioned was that some kids stay until in the hospital until they get a heart transplant, they may have to go on ECMO or a Berlin heart. But then there are some kids that get “well enough” to go home on oral medications and some of those kids even do well for years before they need a heart transplant. There are some of those kids that even end up improving. They couldn’t tell us which scenario would be Hana because they don’t yet understand why some kids do well or even improve.

So far, Hana is one of the kids doing well on oral medications. Her echocardiagram, although not worse, is still very severe. On the outside she looks like a normal baby. She is thriving and growing and developing. The term they used was “exceptional compensation” – her heart is very, very sick looking but she appears to be doing very well. There was a pediatric cardiology fellow that joined Hana’s attending doctor for the exam. He, especially, seemed to be very impressed to look at her (after having just reviewed her latest echo).

I feel very fortunate. It’s a reminder on how fortunate we have been.

At Stanford talked a lot about weaning her from the tube and the risk that they are willing or not willing to take with the wean. She is doing well, perhaps because everything is managed so carefully right now. Once the tube is out that becomes harder. They would like her to weigh 10kg before we do anything drastic like pull the tube out and see if her hunger will make her eat. She weighed in at 8.45 kg, so she is still gaining about 7 grams a day. They decided to drop her mid-day Lasix dose because her BUN was so high, but we’ll see how she does and if she starts to retain fluid. We don’t have to take her back to Stanford for three months!

I got the impression that I need to be more patient (when it comes to her feeding progress).

On a daily basis, moment to moment, some things are still a lot of work – mostly on my mind in this category is feeding. Today I made specially prepared baby food in forms and textures that I thought would be more conducive to eating. I took them to our feeding specialist appointment, which we haven’t been going to because the therapist was on vacation. Hana didn’t want to eat the split peas. We mixed them with yogurt and then she ate some, but just a little, maybe a teaspoon. Then we tried some string cheese. Hana ate almost half a stick! It was very encouraging. The final conclusion was that she likes and trusts white food.

I really had my doubts at first – could a baby really prefer foods that are white? But the feeding specialist assured me that it was not crazy to think she only likes white foods. I guess it makes sense, breast milk is white. Yogurt is white. Mashed potatoes are white. All the foods that we have the most luck with are white. So we wrote down a list of white foods. Over the next week I am going to introduce as many white foods as possible to see if that makes a difference. So far we have yogurt, cheese, cottage cheese, vanilla pudding, chicken breast, cauliflower, white asparagus, tofu, rice and white beans. 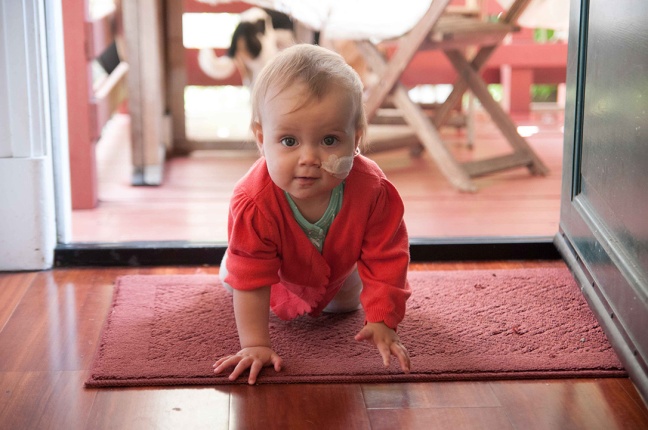 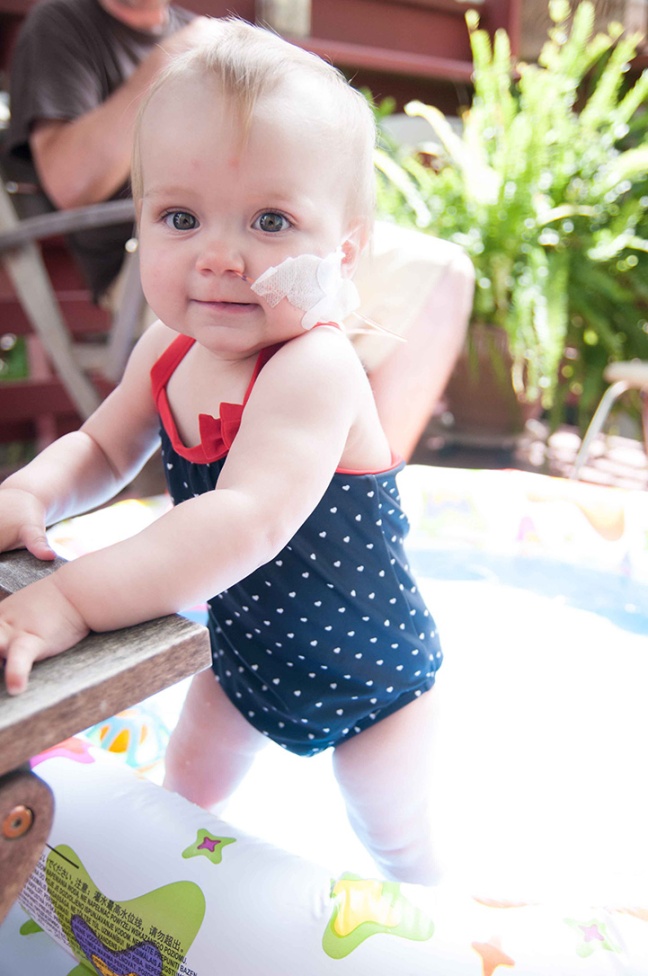 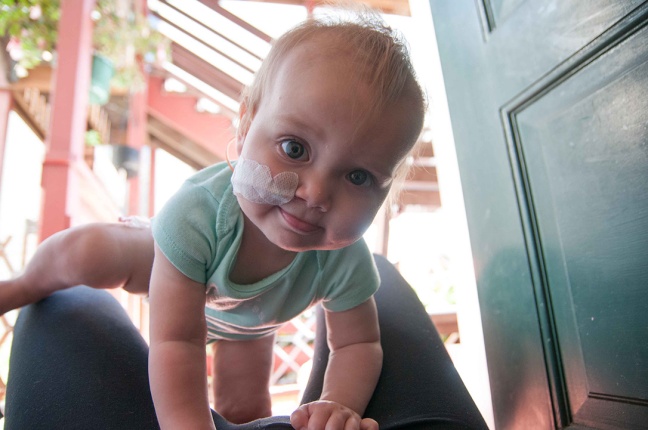 This past week has been about the same. Hana had a cold with a runny nose and she really didn’t want to drink from her Milk Bear. Today she only drank two ounces although she’s been averaging 6-8 ounces. She was definitely more cranky and then I worry it is her heart. Maybe “worry” is the wrong word, perhaps its more like I’m on high alert.

One day last week, she vomited in the middle of the night and her NG tube came out. We decided to leave it out rather than place it again at one o’clock in the morning. The next morning we wanted to give her as much time free of the tube, so Paul went to work and I thought for sure I would be able to find someone to help hold Hana while I put the tube in. Well, it was getting late and I needed to give her medications (via the tube) before too much more time passed. I wasn’t able to find anyone around to help hold Hana. I was getting desperate so, of course, I called my mom.

My mom was able to instruct me on how I could hold Hana so that I could put her NG tube back in by myself. If you have not witnessed NG tube placement on a baby, I can tell you that it is very unpleasant. Hana is squirming, arms flailing, head going from side to side. She is screaming, sputtering, crying, choking and gagging. It’s awful and as the mom or the parent, it feels even worse. I had to take a few moments to take some deep breaths and psych myself up. I decided that if I couldn’t get the tube in, I was going to walk down to Kaiser and ask someone there to help me.

I swaddled Hana’s arms by her sides and then sat in an armless chair with her on my lap. I put one of my legs over hers and then had all the things I needed laid out on her high chair tray. It took a couple of attempts but I got the NG tube in and I managed a pretty nice tape job too. I don’t know if I’ve ever been more proud of myself. It was very empowering. I had thoughts of letting her go tube free more often, for several hours a day because now I could just put the tube back in myself. I don’t know if I want to subject her to that much trauma every day. I wish I knew which was worse – having the tube in constantly or getting a break from the tube but having to endure getting it put back in more often.

Last Friday we had to get bloodwork for our upcoming appointment at Stanford on Tuesday. From what I can tell, the majority of her tests were basically “normal” or at least the same. One test – BUN (blood urea nitrogen) was twice as high as the upper range of normal at 34. I know they talked about maybe having her level be close to 30, but then last time, when it was 15, they seemed satisfied. BUN measure dehydration. They want to keep her dry because it is less load on the heart.

The other test that was different was her BNP which is B type natriuretic protein. I’ve talked about this before. It is basically a substance that is secreted by the ventricles when the heart is in failure. It was going up and up and up since Hana was discharged from Stanford. At the highest it was 1055. Now is is at 589. I think that is great, but we’ll see what the cardiology team at Stanford says. I’m still happy that it is going down instead of up! (By the way, normal levels would be below 100).

Now we just need to get her eating! I’ve been researching a tube weaning approach developed in Austria called NoTube. They have a netcoaching program where they talk with you via web conferencing every day for an hour or so for three weeks. Apparently they have a high success rate. It does cost $4,000! What really turns me off is that they seem like really pushy sales people so I have a level of mistrust. Maybe it is just a cultural thing. I don’t know.