Hana’s breathing tube came out! It went very smoothly! Hopefully they can continue to wean her ventilation so she can start getting tube feeds. Her echocardiogram looked about the same as yesterday. They may even take a few chest tubes out today.

Just a tidbit of information – her donor heart matched her A+ blood type. 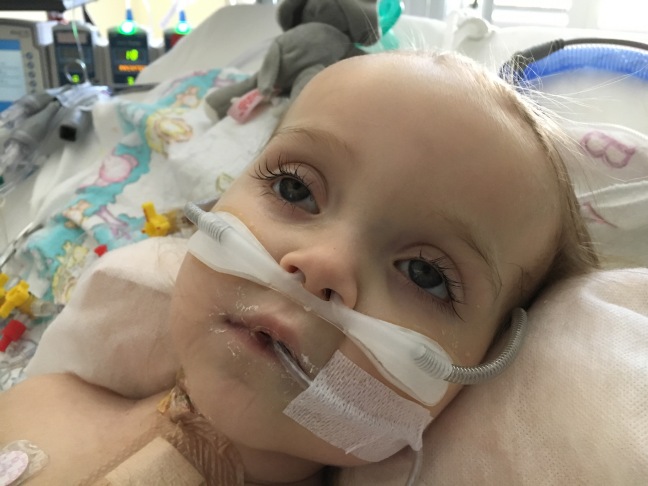 She’s not actually this awake quite yet. I did get to listen to her new heart with a stethoscope, it was AMAZING. Let’s hope the rest of the day goes smoothly!

194 days in the hospital, 2 full days with her new heart!

It’s been a quiet day. Not much has changed since this morning. No preliminary results came back from the cultures they did which means nothing obvious is infecting Hana. Her temperature does go up when she is nearing her next Tylenol dose, which brings her temperature back down.

Her echocardiogram showed improvement in the regurgitation of her tricuspid valve, so that’s good news.

I think the plan is still to try to take the breathing tube out tomorrow, Tuesday. So let’s hope that goes well. We still have a long road ahead! Today we tried to get outside and rest as much as possible because the coming days are probably going to be busy.

Thank you so much for all the support, it has been amazing!

Below is a short clip of Hana’s new heart beating in her chest!

Hana’s fever is down to normal range. They still have her on the cooling blanket. She is still getting two broad spectrum antibiotics, although they switched out the zosyn for something easier on the kidneys. The attending doctors don’t feel like the fever was caused by infection. Attending doctors seem so much more calm about these things than fellows, or at least the newer fellows.

Hana’s CVP is down to about 10, which is where they want it. She is starting to have good urine output. They are still pacing her heart. Her blood pressure has been good. They took out her femoral line and the Foley catheter. Her sedation seems to be in a good place. They started her on Prilosec since she is not getting anything in her stomach.

They will do another echocardiogram today. Her X-ray this morning looked good – a lot less fluid. It’s actually amazing to see her X-ray now, her new heart is so much smaller and doesn’t take up almost the entire left side!

They will most likely not extubate today. Unless they can wean the vent more and if her echocardiogram looks amazing, than maybe. But it’s a holiday and Hana’s had three failed extubations so maybe it’s better to wait until tomorrow when all the normal staff is back and close by.

Overall, they think she is doing really well! 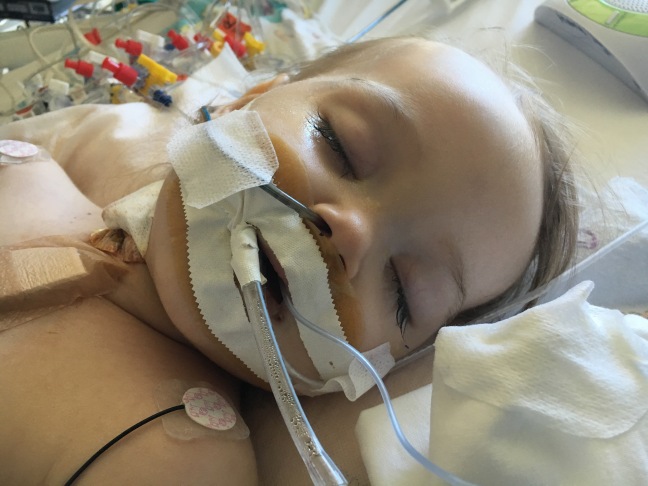 Hana’s temperature has been climbing, even after getting Tylenol. They actually gave Tylenol and Benadryl before giving her the immunosuppressant ATG. In 40 minutes her temperature has gone from 38.6 (101.5) to 39.1 (102.4). This makes me very nervous because it could mean infection. Infection is kind of disastrous because her immune system is suppressed so she won’t reject her new heart. Infection can kill. Or, her temperature could be high because she’s almost 24 hours post-op and inflammation can peak around that time, causing fever. But her CRP and procalcitonin are high and that leads them to believe it’s infection. So, they are doing blood and urine cultures and starting her on broad spectrum antibiotics, vancomycin and zosyn.

We’ve been down this road before and it has always turned out okay. I hope that’s going to be the case. If you want something specific to add to your prayers or positive thoughts for Hana, please add that this is just post-op inflammation, not infection, and that her temperature goes down to normal very soon. Thank you for all the prayers and positive thoughts. We are so grateful!

Following is a beautiful Loving-Kindness meditation for Hana and her donor family, sent by my aunt:

May Hana’s body welcome and nurture her new heart.

May Hana be safe and free from suffering.

May Hana’s heart be strong and whole.

May she live a life filled with gratitude and zest.

May Kathleen and Paul be healed in body and spirit.

May Kathleen, Paul, and Hana grow in joy and peace as a family.

Loving-Kindness meditation for the donor family:

May the donor family be wrapped in a blanket of love and tenderness.

May they be held and rocked in their grief.

May their memories and stories be heard as sacred.

May their compassion and generosity be a lesson to us all.

May their child’s life force bless the world with each sunrise.

In time, may they find solace and meaning in their most loving gift.

In time, may their hearts be healed and at peace.

Hana’s CVP continues to be high around 15. He blood pressure started to get low again. They took her off the propofol and temporarily paused the milrinone and Lasix. They did an echocardiogram and we got to see her new heart for the first time!

Unfortunately, they saw a lot of leakage from her tricuspid valve, which separates her right atrium and right ventricle. They saw no leakage during the echocardiogram in the OR. So, this could be from too much fluid, or valve damage from the new heart being without oxygen for too long. If it’s damage it could get better. Or it could stay the same or it could get worse. Some people live with leaky tricuspid valves and they are fine. If it were severe enough the would consider repairing it or replacing it but we aren’t anywhere close to that.

I wish everything was going perfectly. Because it would be easier on my heart! But Hana continues to do well, her lactate level has not gone above 1.2. So, it is what it is. They started her on vasopressin to help increase her blood pressure. They will then restart the Lasix to take off fluid.

If they can get more fluid off then they will move forward with extubation tomorrow. If not, they will wait another day. 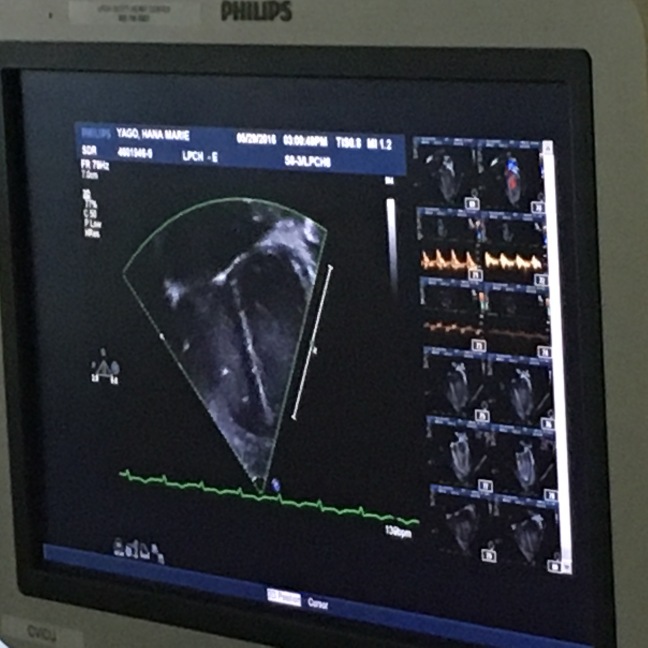 After sleeping for a few hours we got up to check on Hana around 8:30. Apparently, she had tried to climb out of bed! This is actually not good because she needs to stay more sedated and still, especially while having a breathing tube.

In addition to her breathing tube, she has two arterial lines, a 3 IVs, an IJ (internal jugular central line), 4 chest tubes, a Foley catheter, pacing wires and of course her incision in her chest and the two areas where her Berlin Heart cannulas entered her body.

She is getting morphine, epinephrine and propofol drips, precedex as needed. She is getting IV dopamine to help her new heart squeeze and also milrinone to help with heart function. She is getting magnesium and sodium. They’ve started her on IV Lasix to help take some fluid off. She is getting intermittent IV Cellcept and methylprednisone which are immunosuppressant for her new heart. She is also getting another dose of IVIG, just like she would get before. They’ve already taken her off Nitroprusside and fentanyl.

Everything is going really great. They have things they are “concerned” about which just means they watch and make adjustments for, but overall they are not concerned and they think she is doing great. Some “concerns” are her CVPs (central venous pressure) which have been high around 14. They want it to be closer to 10. This means there is more pressure on the right side of her heart. This is why she is getting Lasix to offload fluid. In addition, they have her hooked up to a pacemaker. Her heart rate is set to 140. Her blood pressure was low, due to the precedex but is coming up nicely now that they’ve taken her off of it.

Her right heart they are watching closely because of a long ischemic time. This means her new heart was without oxygen for a long time, although within acceptable limits for a transplant. This happened because her new heart came from “further away”. They can’t tell us anything about the donor but this tidbit of information came up because it is part of Hana’s care. She also might need to be on milrinone for the same reason. If her CVPs don’t come down by this afternoon then they will do an echocardiogram.

For the rest of the day, other than watch her right heart, they will take out her femoral arterial line as long as her radial arterial line seems okay, which I guess can go “soft” after surgery. They will start her on another immunosuppressant called ATG (anti-thymocyte globulin) which will help keep her white blood cell count down. Her IVIG will end (she will probably need IVIG therapy for a year). They are keeping her cool with cold packs because her temperature was a bit high, probably due to inflammation. They will probably start her on TPN, which is IV nutrition, later today.

Her surgery went faster than expected. While she was on heart and lung bypass during her surgery, her lactate never went above 1, which they have seen before. This is a very good thing. I guess your lactate level can go to 1 just getting a blood draw.

Today is the day to rest for us because tomorrow her breathing tube comes out and then it gets hectic! Last night the sounds of the CVICU, beeps and alarms, produced a lot of unexpected anxiety for me. Things can turn quickly here. I keep reminding myself of what is the truth now and that is – she is doing well, so let’s be with that!﻿

It’s a start of a new journey! Transplant is not a cure, it is trading a life threatening condition for a chronic condition. But it is a chance at life! We are still in awe.

Hana’s heart transplant is done! It went very smoothly with no surprises. The surgeon told us the new heart is working very well. Hana just came up from the OR and is getting settled in the CVICU. We will get to see her in about 30-45 minutes.

We did see her as she was wheeled out of the elevator.

I am on the brink of very overwhelming emotions.

After we see her we are going to try to SLEEP. Hana will be very sedated for awhile. Tonight they will just let her be. She has a breathing tube and will have it for about 24 hours.

We are so incredibly grateful for this gift of life! 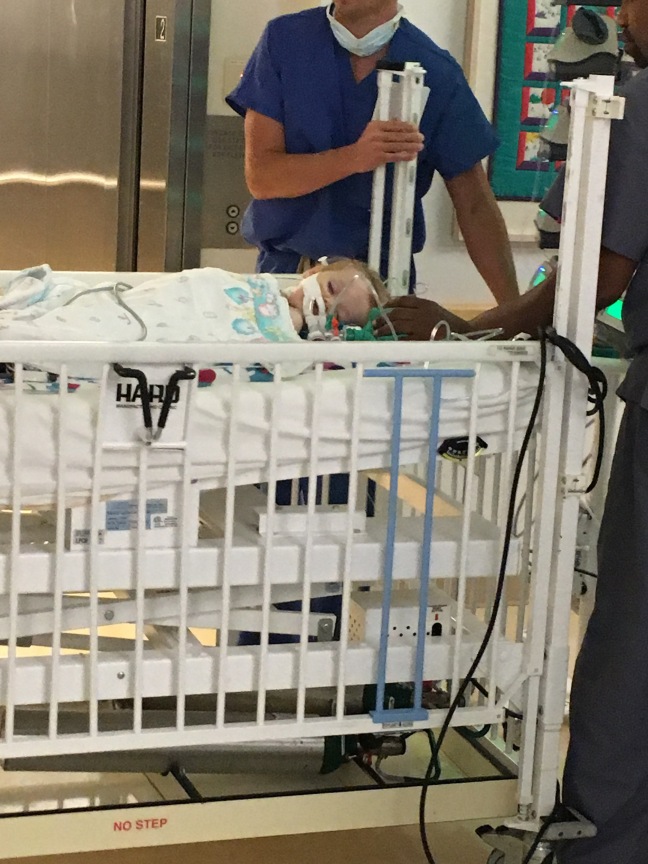 192 days in the hospital, day of transplant!